Luxembourg - on the map

The usual question to start with - what comes into your mind when you hear Romania? Dracula? Transylvania? Usually not really much more, right? I can asure you that this country is way much more than that! Romania is a beautiful country that genuinely has a lot to offer. And I mean really a lot. I've visited it many times, spent there 2 months volunteering and traveling, but I'm still not even close to "I've seen everything I wanted." I always love to come back for a total escape and brain refreshment.

It's actually true that Romania doesn't really rank among the most visited countries and you don't really hear about it much, perhaps also because of basically non-existing promotion from any travel & tourism related institutions. On the other hand though, few tourists, diverse nature, plenty of forgotten places and plentiful wildlife only help to make this country so special.

In my opininon, Romania is absolutely the most beautiful country in Europe. You can find here really any kinds of natural wonders - hills, mountains, lakes, valleys, rocks, caves and even a sea or volcanoes! There is absolutely no chance you would get bored when traveling through Romania as there is always something new to expect behind each curve. If you are a nature lover, you should put it on the top of your list. I can guarentee that you won't regret.

Good to know before you travel to Belgium

o find a bus connection, check the website Autogari.ro, unlike the transportation as such, the website is quite reliable.

Traveling in Romania may take really long, you always have to count with more time. But that's the part of the adventure!

3. Be prepared for bears and other wild animals

As already mentioned above, Romania is actually pretty famous for being the country with the highest number of brown bears. Bears are shy, I've been there many times but still haven't seen one, but the chance you run into a bear still remains quite high. And not only bears, Romanian nature is a place with a pretty great wildlife so while hiking you may actually also bump into wild animals that you may never run into before. And that's why it's so lovely!

And...dogs. There are many wild, homeless dogs around Romania, and I personally think the dogs may be more dangerous than any of those forest, "wild" animals. In fact, neither of the wild animals really look searching for a human companion, but random, sad, hungry dogs with rabies are definitely not the nicest thing you can encounter. Locals say they are not usually dangerous because they are used to people, but I don't know....better to be aware of them.

There are certain rules and steps you should follow when you happened to be acompanied by a bear, as well as there is a certain way you should behave towards wild dogs, but about that later on my blog. 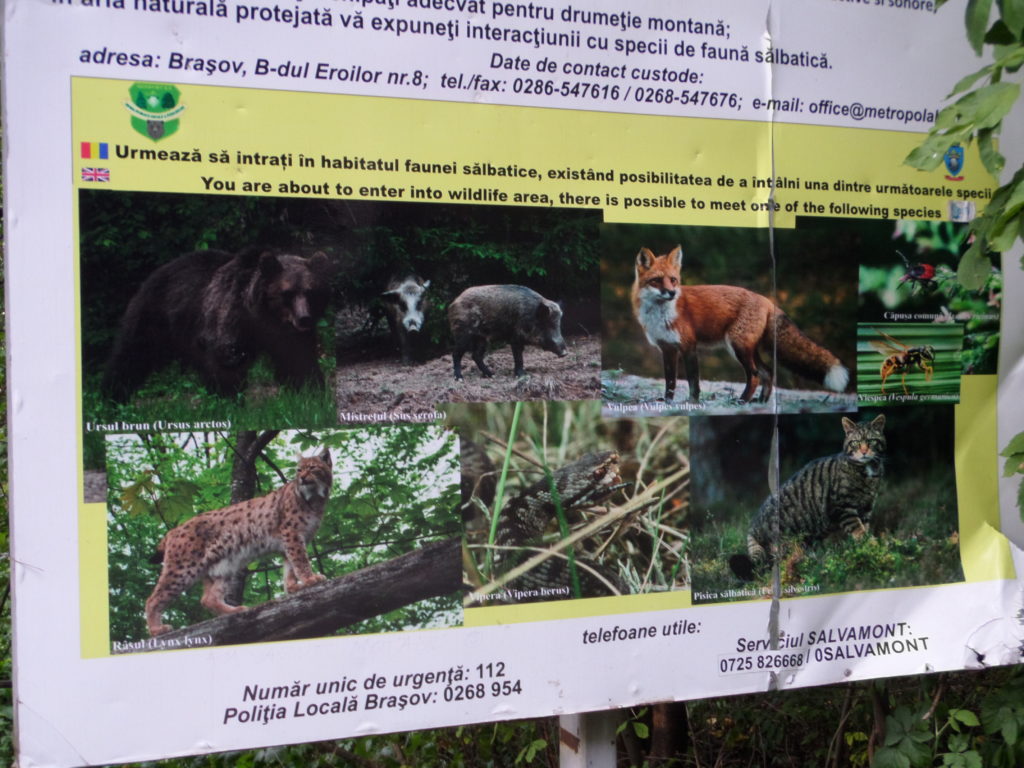 3. In most of Transylvania it is spoken Hungarian!

This is something not so many people know. Even though Romanian is the only official language in Romania, in some regions it may be much easier to communicate in Hungarian. Not that it would make your visit any better, unless you are Hungarian, but you never know. Most of the area of Transylvania, the parts which used to be Hungary until the Treaty of Trianon in 1920, is still inhabited by Hungarians or people of the Hungarian origin. The Hungarian minority consists of over 1 mil. people, making up 6.1 % of population. Therefore, in places such as Cluj (Kolozsvár), Târgu Mureș (Marosvásárhely), Gheorgheni (Gyergyószentmiklós), Oradea (Nagyvárád) etc. you will rather hear Hungarian, as well as the names will always be translated into Hungarian.

Seriously! Believe it or not, I did that. First time I came to Romania, I went hiking in the Piatra Cralului, and I wasn't well prepared. It was a big lesson I learnt. I'm used to hiking, I do that a lot also in the Czech Republic, but somehow I didn't realize that walking in 1,300 m a.s.l. on a nice, "relaxing" trail through a forest is not the same as climbing 2,500 m on the rocks with chains and ladders.

Yet, I was too lazy to take with me hiking boots as they were heavy and capacious to carry them to the plane. But that was the mistake I wouldn't do again. I have a story how I got into a storm on the peak. That was the first time (and the only time) I almost peed my pants. At this elevation there are basically only rocks (sometimes very sharp) and cliffs with just occasional bushes, but there are basically no trees at all, so if you happen to be in a storm...well, may God, Universe, luck, or whatever you believe in stays with you, because there's not many possibilities to hide. And the weather in the mountains changes super fast.

I don't want to repel anyone from hiking, it's not that crazy (and also adventurous), but underestimating it may be really dangerous and you do have to be prepared. So proper, waterproof hiking boots and raincoat are a must! If you plan to take the hardest, long trail, take a flashlight, ideally also a helmet, and, even though I went there just by myself, I strongly recommend you not to climb there alone. I happened to be in a few very empty places, if something had happened there,.....But the Carpathian Mountains are awesome and absolutely worth it!

The Most Popular Places of Belgium

See all photos from Luxembourg

To give you the best possible user experience by personalising content and tailoring and measuring adverts, this site uses cookies. Information on how you use the website is shared with Google. By continuing to use this website, you consent to our use of these cookies. The cookies don't collect any personal information. Find out more.